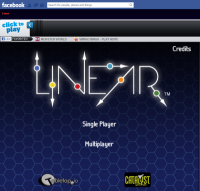 One of the first questions we always get asked is “why Facebook?”

I think that Facebook games often have a stigma to them. The impression even in the video game industry is that only certain games work on Facebook, and that ‘interesting’ and ‘Facebook game’ just don’t fit in the same sentence. In the tabletop games world, the opinion is almost universally the same, perhaps because there are only a few tabletop games on Facebook. Game companies perceive Facebook as a great way to meet and know your customers, but that’s about it.

Facebook’s strengths, technologically, come down to two things:
First, Facebook has an extremely widely-used authentication system. This is actually a pretty big achievement, considering that most people don’t like to log into anything.
The other thing that Facebook can give a tabletop game is an awfully useful way to get in touch with a gamer’s ‘social’ life – the so-called Facebook graph. Why we like the Facebook graph is that players are already using it, and using it voraciously. They plan their play sessions with it, they converse with other gamers through it, they find product information on it, and through this interaction, make decisions. It’s not the only place (thank goodness) but it is a growing part of the fan involvement cycle. We like that. It’s the place where everyone talks about how thirsty they are. We feel like it’s a great place to sell drinks.