Like many beginnings, it started with a question over a lunch in a cafeteria between friends.

Over the summer of 2010, while at at Microsoft, Kenny thought hard about finding a project he could work on, something that could, if they really worked hard and got a few lucky breaks, become something great.  His background in software engineering pointed him toward creating a social and mobile gaming platform company, knowing that there were yet-to-be-made great games for this emerging audience, and there were tools and services didn’t exist yet.  But what kind of games?

In November of 2010, he found his inspiration from a simple question:  Why is it so hard to play a tabletop game nowadays?  For far longer than there have been great video games, there’ve been great tabletop games.  Since tabletop games were the original multiplayer, free-to-play and social games, could being influenced by these games be even more relevant now?  If this is true, why weren’t there many new, original games that could delight gamers on mobile devices or social sites that felt like a tabletop game?  Could Kenny make, market and sell a tabletop-like game platform successfully?

He could.  Jackson Maynard creates games and software solutions that extend the normal modes of mobile and social gaming by making games inspired by the tabletop game art.  The games they created challenge players to think, to share and to experience a game together, and delight players with deep interpersonal connections, rewarding gameplay and wide availability.  This is what makes Jackson Maynard different: They believe that what makes a great mobile and social game lies in the desire for human connections that comes naturally from tabletop games.  At that moment, Jackson Maynard’s operational strengths of top-level software expertise and a love of making games and platforms, and Kenny’s individual strengths in product vision and execution focus combined to form Jackson Maynard.
(photo credit: Microsoft) 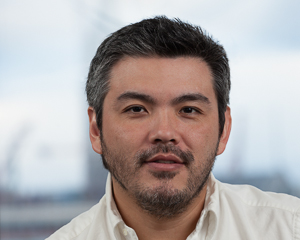 Founder and CEO
Contact Kenny: kenny@jacksonmaynard.com
LinkedIn Profile
Kenny’s interested in software as a way to create things out of ideas.  As co-founder and Chief Task Inheritor, Kenny’s role at Jackson Maynard is best described as ‘varied.’  His chief responsibilities are growing relationships with clients and creating the right environment to make great software.  Kenny’s had more than 15 years’ experience as a computer programmer, consultant and project manager, including working for such companies as Microsoft, Foster Pepper, and Akamai.  In all that time, he’s listened to people say “Make my vision awesome  by executing awesomely” and he did so. Continuing those alchemical experiences is the foundation of Jackson Maynard.
[/one_half]